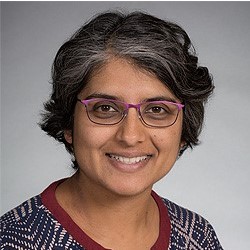 For Dr. Rena Patel, her career path and world view have been shaped by the experiences she had in her formative years as much as her formal medical training.

At the age of six, her family moved from the U.S. to India, where her parents were originally from, so that her father could open a solar panel manufacturing company. Her family moved back to the U.S. when she was 12. Experiencing two international moves by the age of 12 gave her awareness and perspective of inequity, ranging from gender issues to food security, and has informed her career of caring for others.

Dr. Patel attended undergrad at the University of Illinois in Chicago. A factor in her decision to attend the University of Illinois is they offered a guaranteed graduate admissions program, so being accepted into the undergraduate program also guaranteed an admission into their medical school after earning her undergraduate degree. This opportunity allowed her the freedom to pursue varied topics in her undergraduate education and obtain a broader perspective than a typical pre-Medicine education might offer. She majored in History with minors in Women’s Studies and Sociology, and spent her summers abroad volunteering for various non-profit organizations.

Her first summer of undergraduate study, she conducted HIV/AIDS prevention education work in secondary schools in India. The next summer, she returned to India to volunteer with rural development non-governmental organizations. The following summer, she again conducted HIV/AIDS prevention education in schools and orphanages, but in Tanzania. Being an American of South Asian descent, she was aware of the historical context of community and colonization in east Africa, which added layers of complex learning for her, and allowed her to experience and live better with discomfort. In this experience, she felt the inequities and disparities she had previously experienced between the U.S. and India further intensify in Tanzania. Following this experience, she decided to continue working in sub-Saharan Africa, a decision she struggled with then—and continues to struggle with even now—with the legacies of colonialism, neocolonialism, globalization, and working with communities not your own.

Given these experiences, Dr. Patel, a woman of color and an Asian American, tries to be actively aware of the white savior complex that is present in the field of Global Health today. She works hard to build authentic collaborations with local principal investigators and/or researchers when conducting her research globally. She also tries to build capacity into her work for staff and others working in-country.  When advocating based on her research findings, she tries to give voice to as many individuals and stakeholders affected by the work.  As she reflects on herself 20 years ago, she is not sure that her practice today is as radical as she thought she would be, but she continues her mission to do her work as mindfully as possible.

Reflecting on her career aspirations when she was younger, Dr. Patel envisioned herself working in a development role within a government agency or a non-profit, and did not think she would be a physician scientist. She always rooted for the underdog and identified with counterculture. She attributes her work path to the process of going through medical school and the acculturation that happens in the medical field, but she is proud that her career has remained grounded in a values-based mission of helping to address inequities and justice, rather than attaching herself to a specific skillset.

In her closing remarks, Dr. Patel left our START RAs with this piece of advice: “Don’t worry too much about where you go next. Surprisingly, there are so many moments to pivot in life. Certain pivots might have challenges, but they are not uncommon and not impossible.” Finding a cause to struggle for has really pushed her, and she encourages everyone to really push themselves in their paths, because this is where her growth as an individual comes from.