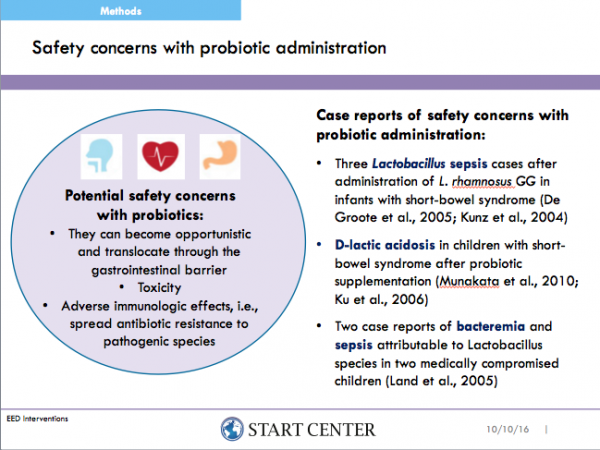 The Enteric and Diarrheal Disease Team of the Bill & Melinda Gates Foundation engaged the START team to conduct a landscape analysis probiotic interventions in preterm infants, children under 5 undergoing immunosuppression therapy, or living in LMICs.

The Enteric and Diarrheal Disease Team of the Bill & Melinda Gates Foundation previously engaged the START team to conduct a landscape analysis of intervention trials examining the safety and efficacy of prebiotics and/or probiotics in interventions using growth markers associated with EED. During this phase an additional but parallel track of work was identified to conduct a similar landscape analysis. During the course of this analysis, an additional track of work was identified to do a similar landscape analysis focusing on the safety and tolerability of probiotic interventions in special populations. The Start team drew from a body of literature sourced from Embase during a previous iteration of this project, EED Interventions 2.0. The START team targeted published literature evaluating the safety, tolerability and efficacy of probiotic interventions conducted in preterm infants and children under five receiving immunosuppression therapy, or residing in Low and Middle Income Countries (LMICs). Of the 403 titles identified 36 articles for full text review, 25 of which were extracted for safety, tolerability and efficacy analysis.

In most studies reviewed, evaluating the safety and tolerability of probiotics was not the study’s primary objective.  Often, it was a secondary objective or simply one of many recorded outcomes. The most common study objective was to evaluate the usefulness of probiotics in treatment for acute diarrhea (all 7of these studies were conducted in LMICs). Evaluating the safety and tolerability with enteral feeding in preterm infants was also common.  These studies were conducted mostly in high-income countries e.g. US, France and Japan, with the exception of a single study conducted in Thailand. Studies that were conducted purely to evaluate the safety and tolerability of probiotic administration (n=4) were all in LMICs (Bangladesh, Turkey, India, China). The majority of probiotics and synbiotics were safe and well tolerated. No association was observed between LMICs and the frequency of adverse events. Ten studies cited systemic infections in children though none were attributable to the intervention probiotic. The incidence of adverse events in treatment and control arms were not found to be statistically significant in studies pulled for safety, tolerability and efficacy analysis.