Slow Ideas: Some innovations spread fast. How do you speed the ones that don’t? 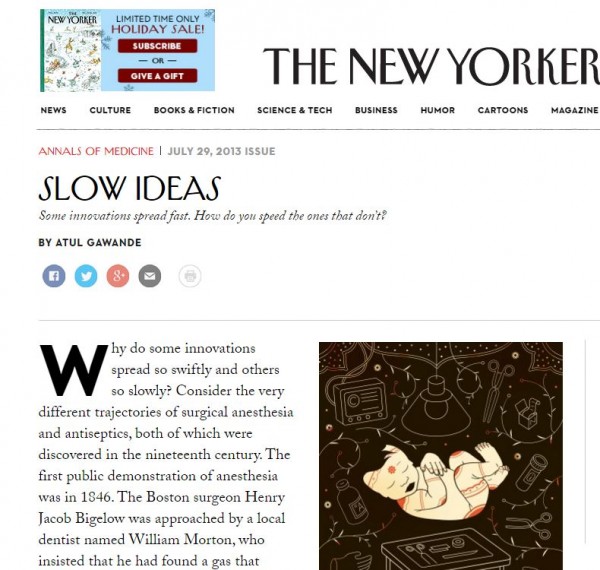 The START Center’s research is referenced in the following 2013 article by The New Yorker.

Why do some innovations spread so swiftly and others so slowly? Consider the very different trajectories of surgical anesthesia and antiseptics, both of which were discovered in the nineteenth century. The first public demonstration of anesthesia was in 1846. The Boston surgeon Henry Jacob Bigelow was approached by a local dentist named William Morton, who insisted that he had found a gas that could render patients insensible to the pain of surgery. That was a dramatic claim. In those days, even a minor tooth extraction was excruciating. Without effective pain control, surgeons learned to work with slashing speed. Attendants pinned patients down as they screamed and thrashed, until they fainted from the agony. Nothing ever tried had made much difference. Nonetheless, Bigelow agreed to let Morton demonstrate his claim.

On October 16, 1846, at Massachusetts General Hospital, Morton administered his gas through an inhaler in the mouth of a young man undergoing the excision of a tumor in his jaw. The patient only muttered to himself in a semi-conscious state during the procedure. The following day, the gas left a woman, undergoing surgery to cut a large tumor from her upper arm, completely silent and motionless. When she woke, she said she had experienced nothing at all.

Read the full article on the The New Yorker website.