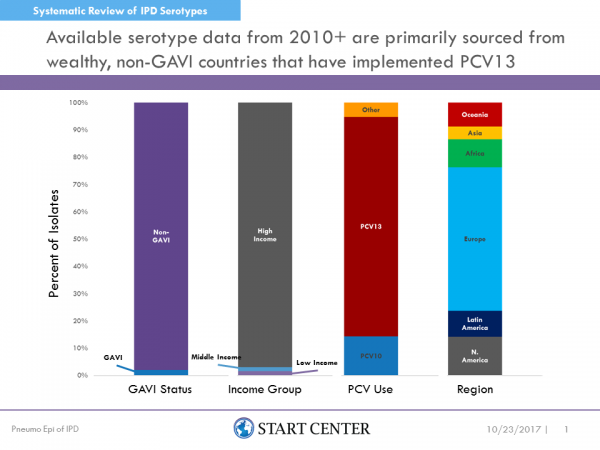 The Pneumococcus Initiative, as part of the Pneumonia program strategy team at the Bill and Melinda Gates Foundation (BMGF), is charged with: reducing the burden of pneumococcal infections by expanding coverage of existing vaccines, developing lower cost vaccines that provide equal or greater protection, and generating evidence for sustainable pneumococcal immunization programs. To inform efforts surrounding those goals, the BMGF commissioned the START Center to perform a global review on the distribution of invasive pneumococcal disease serotypes in persons of all ages. Specifically, the START team was instructed to utilize the following sources: unpublished data from collaborators of the BMGF, publicly available surveillance data, abstracts and posters from the International Symposium on Pneumococci & Pneumococcal Disease (ISPPD), and the published literature using methods and search terms utilized in earlier published reviews. Inclusion criteria mandated that data must be from normally sterile sites (blood, cerebrospinal fluid, etc.), samples drawn from January 1, 2010 onwards, and provide sufficient detail on serotypes of isolates.

The START team screened 1,151 abstracts for inclusion criteria, of which 268 were screened in for full text review. In total, 95 peer-reviewed articles were included in the analysis, supplemented by data from six public surveillance sources, five BMGF collaborators, and three ISPPD abstracts. Data were abstracted from each source on country, age, year of data, year of publication, study/sampling design, study duration, cases by serotype, and whether the source reported on incidence or microbial resistance. These data were entered into a standard form in Microsoft Excel, where it was merged with data on each country’s Gavi Alliance status, vaccine usage and coverage, as well as income status. Results were aggregated in tables, graphs, and maps automatically in the same electronic file such that users could customize their view of the data based on any of the data elements captured above.

The START team collected serotype and metadata from 172,564 IPD isolates in 54 countries. The largest proportion of isolates were from high income countries, with the U.K., Canada, Spain, South Africa, Australia, Brazil, and the United States contributing over half of the data. Only 13 Gavi countries were covered in the analysis, representing only 2.3% of all isolate data. Further, 75% of data were on isolates sampled between 2010 and 2014, while the remainder was sampled in 2014 (inclusive) and later.