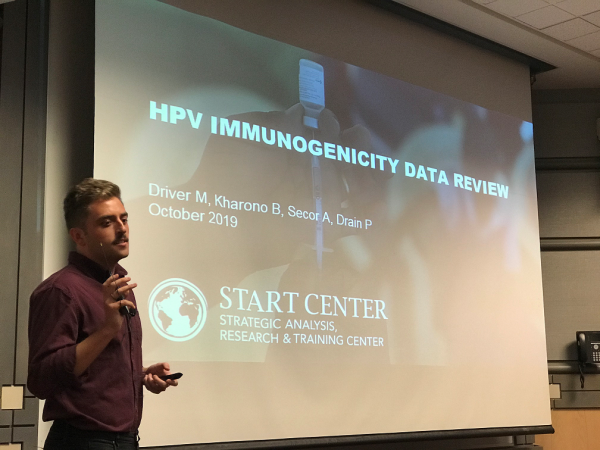 With an estimated 570,000 new cases in 2018, cervical cancer is the fourth most common cancer in women and the seventh most common cancer overall. While mortality has declined in the past four decades, cervical cancer remains a threat globally; approximately 90% of deaths due to cervical cancer occur in low- and middle-income countries. Three licensed and WHO-prequalified vaccines currently exist to prevent HPV, the sexually transmitted infection responsible for cervical cancer. Although these vaccines are subsidized by Gavi for many low-resource settings, they remain out of reach for many low- and middle-income countries who do not benefit from Gavi support or are transitioning out of Gavi support eligibility. Additionally, the approved dosing schedules for these vaccines are resource-intensive and can be difficult to implement programmatically in countries with limited healthcare infrastructure. There is considerable interest in the global community in novel approaches to HPV vaccination with reduced dosing schedules; while such approaches are being studied, comparative data across studies is difficult to interpret due to differences in assays, timepoints tested, and age groups studied.

Beginning in October 2018, Research Assistants from the START Center engaged with the Integrated Clinical Vaccine Development team at the Bill & Melinda Gates Foundation to conduct a systematic review and meta-analysis of published literature on the licensed HPV vaccines. The purpose of the review was to better understand the available data regarding the immune response following non-standard dosing schedules as well as to compare the immune responses between standard and non-standard schedules. Specifically, the START team identified key data for single dose schedules as well as extended interval schedules (defined as schedules wherein the second dose was administered at least 12 months following the first).

The START team’s work represented one of several ongoing workstreams related to non-standard dosing schedules for the HPV vaccine conducted by a consortium of global research institutions. Matt Driver, START Research Assistant and project manager for this engagement, presented the project findings at the annual face-to-face meeting of the consortium in Washington, D.C. The START research team identified 11 published articles with relevant data for single dose or extended interval schedules. Seven of these articles were included in the meta-analysis, as well as 24 articles with data on standard dose schedules. The START team found that extended interval dosing was generally comparable to standard dosing, though more research is needed to identify the precise dosing schedules at which protection against infection is afforded.